It is About Survival 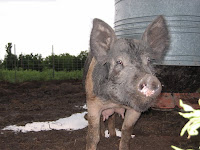 I know that this is a topic that I have blogged about before, and the article that I'm taking the information from is from the June, 11th edition of the "Iowa Farm Bureau Spokesman". Nonetheless I am dumbfounded each time I read about the current crisis in the pork industry. The title of the article that I read yesterday is, "Goal is survival, economist tells Pork Expo crowd", and it really details a difficult time for the hog farmers across the country. And by difficult I mean they are losing money or on the edge of losing money.

Glenn Grimes, of the University of Missouri, said this, "There will be some rough times ahead, but the hog industry will survive. One of the things you have to think about is how to get from here until the end of 2009, not about how much profit you will be making. Your goal is to survive." The article goes on to say that the breakeven cost for most of the hog farmers in Iowa is around $60 per hundredweight. Today lean hogs are selling at about $70 per hundredweight. So, there could be a little profit ... but, corn, bean, and fuel prices have gone up since July, 11th.

I guess I read an article like this and think about the ramifications for the farmers and I wonder how in the world this could happen. It is not like we are talking about computers or iPods here that are just "wants". We are talking about food! How have we as a nation gotten to the point where producers lose money in order to provide food for our nation and the world. Okay, I guess I understand the "how" and to a point I understand the "why" (we are addicted to cheap subsidized food), but I really can't figure out how we can keep going in this direction.

There is one other thing that I think about when I read an article like this ... can I make any money with the eight feeder pigs that I will have finished this fall and for sale. Right now it costs about $18 per hundredweight of feed and pigs like to eat (even though they are the best converters of feed to weight). Will those numbers work out for me and will I be able to make ends meet?

Remember ... I'll have wholes and halves of pork for sale this fall ... let me know if you would like to be added to the list!
Posted by Ethan Book at 8:07 AM

You raise some great questions here. I honestly don't know how we got to this state, exactly. Michael Pollan has some good things to say about the beef industry and how beef became so cheap. You're correct that subsidizations are a part of this -- cheap grain. Another way to speed up the process was steroids. That decreased costs. Feedlots decreased costs. However, steroids and antibiotics don't contribute to the pork industry, right? I'd like to know more about the history of food and how prices have changed over the years, but I'm afraid I'm relatively ignorant about that. A good source might be Pollan's The Omnivore's Dilemma, though. I'm sure I'd disagree with him about various matters, but it seems like he's done some good research about why things are the way they are today. My guess is that government interference has a lot to do with this. It certainly has had a ton to do with milk regulation and price fixing. Also, single product farming, having to deal with middlemen means less profit for farmers, right? So I would guess some of it is purely economic stemming from the way farming evolved in the green revolution, but another part of it is the regulation.

I hope you can find customers near you who are willing to pay a premium price for a good product. it's hard for you in the current economic climate, I'm sure. But we get pastured pork here in Colorado and it's truly amazing stuff. I will not go back to grocery store pork now. I'm eager to try out the farm's chicken and beef, too. I'm relatively new to these products, but I'll never go back. Even if I have to decrease my meat consumption to afford better quality.

Somewhere I once read something about how "unfair advantages" can be used to increase profitability. For example, when grain prices are high (and going higher) a grass-finished beef operation has an unfair advantage over a feedlot that's profitability depends on cheap feed.

The way Walter Jeffries at http://sugarmtnfarm.com/blog/
feeds hay to his hogs is particularly interesting. Enough hay to feed a number of pigs could be easily made by baling the "odd" corners of the farm (I think I've read that hogs prefer a "lower quality" stemmier hay than cattle).

Pasture Cropping (drilling or broadcasting a cereal grain into dormant pasture) is another technique that could be used to feed pigs. Instead of harvesting the grain from a cereal grain that was drilled or broadcast into a dormant summer grass pasture, it could be easily baled at the dough stage (or later) and fed to the pigs. Something like pasture cropping would create multiple possibilities; winter grazing for cattle or pigs, a possible grain crop harvest, overall improved fertility in the pasture (due to the pasture cropping method), direct harvesting of the grain by pastured pigs, or a hay crop (for either the pigs or cattle).

Poor prices aren't really a new thing for farmers. It's plagued farming for the entire life of the country.

I have to wonder if reluctance on the part of farmers to get involved in the political process (ie make noise) is part of the problem with bad farm policy. I know scientists talk lots amongst themselves as to how they can't go on pretending like politics don't affect them, because government funding is a huge part of their livelihood (just like farming, at this point).

Generally farm policy (whatever its real purpose is) is sold to the public as being "to help the family farm." If a couple of family farmers were then to, I dunno, call CNN or the Drudge Report and say that ain't so, what do you suppose would happen? It's hard to be an emperor on parade once everybody figures out you're nekked.