Okay, we have placed a hold on the dexter cow Peaceful Place Karen (who is bred back) and a steer named Rocky Road. Hopefully Karen will become the start of our herd and Rocky Road will become our first grass-finished freezer animal. So, in about a year from now you might want to hit us up for some good eatin'!!

We aren't going to be picking her up until the middle of July after we get back from the Mission Trip and Camp ... also, it gives us some time to get the fencing finished up at my dad's.

Here is another picture of Karen... 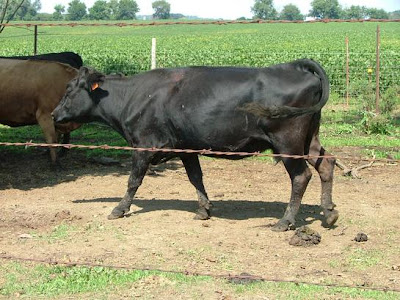 It has been a little quiet lately on the "Beginning Farmer Blog", but that doesn't mean that farming thoughts and discussions haven't been occuring. Lately I have really been researching grass-finished cattle and looking at the Dexter breed specifically (as I mentioned earlier).

Well, this past weekend we had a chance to go and check out one of the larger Dexter herds in the area. We went and saw the herd at Grandma's Dexter Farm which is located north of Cedar Rapids. It was nice to get out and see some of these cattle in the flesh and talk with someone that has been around them. The owner of the farm was Dan Butterfield and had a lot of answers to some of the questions that had been bouncing in my head. One of the great things was to see a large number of Dexters ... Dan has around 40 now, but has had over 60! I spent about 20 minutes in the cattle lot with him among the cows and the bull and I can easily attest to the fact that they are very calm. While we were in there he pet his bull as the bull sniffed my shoes and had a few different cows come up to say hi.

Besides just checking out the breed in general we also went with the purpose to check out some cows that he had for sale. One in particular is Peaceful Place Karen ... who is pictured below. 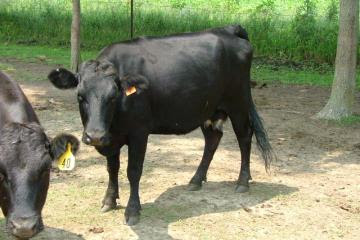 That isn't the greatest picture of her, but she is a good looking dehorned cow. If we got her we would also be picking up a steer to finish out for our freezer and she is bred back to calve next year. I'm pretty excited about the possibilities, but I'm trying to do a little more research first. I think I've talked to four different herd owners in Iowa, and I'm trying to set up an appointment to check out another herd in person.

Along the grass-finished lines I have also recently ordered Joel Salatin's book "Salad Bar Beef" in hopes of learning some finishing tips and pasture ideas.
Posted by Ethan Book at 4:23 PM No comments: