I am currently reading "Salad Bar Beef" by Joel Salatin for the second time. I don't really want to become a person who worships Joel Salatin, but I wanted to get a second look at his ideas on grass-fisished beef. This time, as I read, I highlighting some of the more interesting or important things ... partially for my own use and partially for my dad. I'm hoping that he will read it as we are going to be entering some some this farming thing together.

One thing that I have really noticed as I reread "Salad Bar Beef" is that there are lots of different take on this whole "grass-finished beef" idea. Gene Logsdon's book, "All Flesh is Grass", takes a pretty experiemental approach to finishing beef. He writes about experimenting with different grasses, legumes, and other ideas. The thing about Mr. Logsdon is that he is not really a "full-time" farmer (meaning he does not get all of his income from the farm) and that he likes to try different things. His book was very informational for thinking outside of the conventional farming "box", but also seemed like a bit more involved approach.

Mr. Salatin is very much straight forward in his approach. He tells people to get animals before reseeding pastures, adding lime, or anything like that. Also, he preaches the idea of growing in your fields what grows in your ditches and leading the animals and the natural progression rehabilitate your pastures. I think maybe Mr. Salatin would agree with my uncle's quote, "reading is good, doing is better". He wants people to start doing and then see what needs to be done in order to increase the lands cattle carrying capacity.

Finally, as I reflect on the field day that I attended last week I am really seeing the many different approaches to making a living raising cattle through value added or sustainable practices. The DeCook's ranch that I visited last week was around 800 acres and they were raising 500 head at a time on their ranch (cows, calves, yearlings). I would say that they were practices a sort of rotational grazing but not really a managed intensive grazing approach. For example, when we visited they had 200 dry cows on about 40 acres. He was planning on leaving them there for four or five days. In talking with him it seemed that his greatest limiting factor was water.

Which brings me to a few things that are really on my mind right now. First of all, I'm very interested in learning more about and putting into practice some electric fencing ideas. I liked what I saw at the DeCook ranch and I'm interested in the things I read in Mr. Salatin's book, but I would like to see things in practice. Secondly, I would really like to learn more about watering systems so that I don't have that limitation on my setup (if I ever have a setup!). And finally, I would like to read some more books to continue to get a different prespective (or talk with other people). I am thinking about checking out some of Allan Nation's books, of the "Stockman Grass Farmer", but I'm having a difficult time choosing. If anyone does actually read this blog let me know if you have any ideas.
Posted by Ethan Book at 10:33 AM No comments: 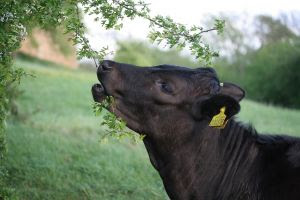 It has been a long time since I last posted a blog. I haven't forgotten about this ... my life has just taken on a extra bit of busyiness. Just because I have been busy doesn't mean that I have stopped thinking, reading, and doing farming. Since my last post I have finished a couple of books (Salad Bar Beef - Joel Salatin and All Flesh is Grass - Gene Logsdon), sent final payment for our cattle (but not picked up yet because of a important family issue), built fence for the cattle, and done a lot of talking with farmers and family.

But, today I had a chance to go to my first PFI (Practical Farmers of Iowa) Field Day. The day was hosted my the DeCook family which farms about 20 miles south of where I live. They raise grass-fed beef on about 800 acres (around 500 head of cow/calves). It was a great tour of their farm that included five stops for some great explanation and question/answer time. I learned a lot about pastures (seeding, management, forage types, and more), fencing, water, and just some good conservation practices. The DeCooks do not run their farm exactly as I have envisioned mine because they do not finish their cattle, but they do send them off to others to be finished on grass so they select for good foraging genetics. It was a very enjoyable morning full of information. I also heard about a couple other field days coming up that I would like to attend. One is next week and focuses on portable fencing and solar water pumping (something I think could be very helpful on my dad's farm).

Hopefully we will have a chance to post some pictures of our cattle at home on the farm soon. Remember, reading is good ... doing is better!
Posted by Ethan Book at 7:13 PM No comments: