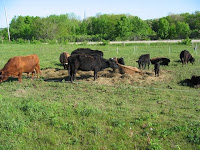 This morning some one said to me, "May 7th!" With a look of confusion on my face I admitted that meant nothing to me, but then they were quick to point out that was the last time I made a blog post. (Oddly enough it was about me wanting a truck and wanting to sell my Expedition ... I still want a truck, but haven't sold the Expedition yet.) I wish that there were just tons and tons of things that I needed to catch people up on, but really things have been rather mundane ... and very busy all at the same time. I will try to take some time this week to share some of the changes that have been happening. The most exciting one though is probably the fact that I'm now making three moves per day with the cattle.
I'm not sure what to call it because it really isn't Mob Grazing because of the limiting factors of the pastures, but it is at least spreading out some nutrients and getting the cows on fresh grass often. The limiting factors that I'm talking about are the very thin and not super lush stand of grass that I have right now. After 14 years of no management and plenty of weeds and brush taking over the stand of warm season grasses is not very thick and it doesn't take off very quickly in the spring. Because of that I end up putting the cows in smallish areas, but they eat off the grass very quickly and then need to be moved. Also, as you can see in the picture above I started off feeding a little hay to keep them in a small area longer, but I just found it was too much hassle and didn't help the way I wanted it to. There isn't a large concentration of manure being put down ... but, it is a start!
I'm also beginning to get an idea of just how much grazing is possible on the farm and I'm liking what I'm seeing especially as the pastures begin to improve ... which has to happen at some point. Tomorrow I'll try to post a picture of what the ground looks like after the cows have been moved and then what it looks like a couple weeks later. Like I said, the warm season grasses don't take off, but there is some regrowth happening and I think over time the clovers will come back and more.
So far the down side has (besides the thin pastures) has been the watering. I have a large tank on a hay rack that I move around with them and a waterer that I drag to each paddock, but I don't like how it's working out so far. I do have some plans though and I'll share them as I think through them.
Hope this counts as a post :) And, I'll share a little more as the week goes on.
Posted by Ethan Book at 8:54 PM 6 comments: 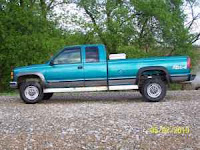 It's been busy lately around the farm, the church, and with the family. Because of that I've fallen off the blog map. But, while I was gone I was keeping up with the good discussion going on in my post about farm decisions and purchasing a truck. I've been wanting to jump in on the discussion, but just haven't had the chance until now, so I decided a whole new post would be a good idea since I think there has been a lot said ... and I've had a lot on my mind. If you want to catch up on the original post and the discussion thereafter just check out this link.
The general consensus is that I need a truck ... in fact some people are surprised to hear that I've been farming without a truck for the past few years. But, sometimes reality is that you can't have everything that would be nice to have and that you certainly can't have it at once. That has been the case with a truck, and I've been making do. Instead of a truck I've been using a variety of trailers ... borrowed from family and friends. Now I'm ready to make the plunge though ... if I can make everything work out.
But, there are some realities that I need to face if I'm going to get a truck. Right now I have a 2000 Ford Expedition with about 140,000 miles on it. I've had it for about 5 years and during that time have had some work done on it that should help it keep going for some time to come. This vehicle can pull the stock trailer with no problem and I've used it to haul as many as three large bales (round and square). On top of all of that everyone in the family can fit in it and it is paid for of course.
With that in mind I need to purchase a truck that will replace the Expedition and still work out for my needs. It will need to be an extended cab with a bench set up front and in back if possible. Since I'm selling the Expedition it's going to need to be 4x4 (it just makes sense). A long box would be a plus and I'll even admit that I wouldn't mind a topper (even though I hate the looks of them).
The issue (as always) is finances. I believe I mentioned that I wasn't going to buy a truck until I sold my Expedition. I think that just makes sense not to have two big vehicles sitting around and have money tied up on both of them (one of which I won't be using). I also have to look at other priorities on the farm and look at where to spend the limited resources I have. With that in mind I want to sell the Expedition and purchase a truck for pretty much the same amount ...
I realize that won't get me the biggest and baddest and that it means I may have to compromise in some areas, but this farm is only a working farm it it can not break me financially! If I went out and got a new truck ... okay that won't happen! Let's just say that if I went out and got a $12,000 truck I would have to eat into money that could be used for other things on the farm ... like buying hay, putting in more fence, getting temporary fencing supplies, adding sheep, installing water and electricity to the shed, and so much more. That truck might be nice and wonderful and be able to do a lot, but I might not be able to afford to do the things I could use it to do ;)
So ... sell the Expedition and then get the best truck that I can with the money I have in hand. It won't work out perfectly, but not much else has so why would I expect this to? That's just the way it works on the farm sometimes ;)
Posted by Ethan Book at 2:07 PM 15 comments: