In case you missed it ... this past July I completely shredded my achilles tendon while playing the manly game of co-ed slow pitch softball. The doctor said that it looked like two mop heads, but he put it all back together and after a few months of casts and a walking boot I was as good as new. I guess I should say that technically me tendon was as good as new, but my right leg muscles were pretty much worthless and my overall physical condition had suffered from all of the sitting that I had to do. I went to physical therapy as long as my friends at the medical insurance company would let me, and then I was on my own. For the most part I thought I had recovered. Sure my ankle was stiff when I would get up in the morning or if I had sat at my desk for an hour or so, but all in all I was getting things done on the farm relatively okay.

Then I went to play basketball ... the first real physical activity since my injury ... and I found out that I wasn't really back to normal yet. It turns out that my right leg muscles were still a bit mushy and squishy! I guess it is something that I knew, but I just figured that by working on the farm and doing my daily chores I would get myself back into shape. After playing (sort of playing) basketball that night I realized that I needed to take my physical conditioning seriously and get ready physically ready for the heart of my farming season that will be here before I know it.

All of this has led me to the local Recreation Center where I have found myself doing all sorts of things that I didn't even do when I was a "race winning" cross country runner (it may or may not have been a junior varsity race). I've been running on the treadmill, going into the weight room to work on specific leg muscles, striding on these weird exercise machines, and huffing and puffing a lot! Besides realizing that I am out of shape I have also begun to think about the importance of fitness to a small-scale farmer like myself.

Trust me ... you get a workout on the farm no matter what kind of farm you have! But, when you are tromping through a three acre paddock trying to pick four pigs out of forty to load on the trailer it helps to have a little bit of physical fitness ... because it may or may not take you awhile (although I have improved my system over the years). I can easily see the benefits of continuing at least a modest "Farmer Fitness" routine ... even if it just means jogging a few days a week to get the heart rate up through running for fun instead of just running from that momma sow out in the woods! Plus, with my families blood pressure and heart issues it might not be a bad idea.

If you have anything that you do to keep your "Farmer Fitness" level up I'd love to hear about it! 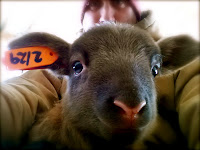 Farm growth is a funny thing ... it both does and doesn't happen overnight. For a person like me, with the patience of a 3-year-old, that is sometimes a very difficult thing and is part of what I call the "growing pains". I have already mentioned that I like to have things "now" which has gotten me in trouble before because I've brought enterprises to the farm before I was ready. Besides that though my desire to have things "now" also causes me frustration and "growing pains" when I see a marketing opportunity is available, but I'm not able to jump on it right away because some things just take time.

All of that is to say that 2013 will hopefully be a big year of changes for Crooked Gap Farm. In the coming weeks we are going to be meeting together to plan out what is going to change on the farm and how those changes are going to come about. It will be a tough meeting, but one that I think is important for the life of the farm. Of course I will share the outcomes from the farm meeting ...

The biggest challenge to me though is that with all of the changes I probably won't be able to see the benefits on the marketing end until 2014 ... oh patience ... I pray for patience!
Posted by Ethan Book at 12:23 PM 5 comments: 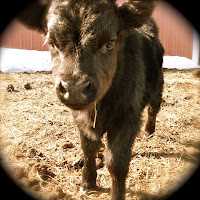 I believe the best way to describe the first two years of growth at the farm would be to use words such as: Chaotic, Uncontrolled, Stupid, Out of Control, Spastic, Dumb, and Survived. What I'm trying to say is that if I had it to do all over again there are one or two or ten thousand things I would do differently! We bought the farm, built the house, brought twenty cows and calves to the farm with no fencing, purchased pigs, bought tractors (they broke ... a lot), and much more! Oh yeah ... and we didn't know anything about farming except what I had read in a book!

Because of the blog and other opportunities that I have had to share my farming experiences I'm often asked what advice I would give to someone wanting to start a farm. I think my most shared piece of advice is that people shouldn't do it and I share with them why they shouldn't do it! My thinking is that if they take my advice they probably shouldn't have been farming in the first place, but if they go ahead and farm anyways then they probably have at least some of what it takes to make it past the first couple of years. I digress ... that was just public service announcement and not a discussion of the farms growth!

What I am trying to say is that for the first two years I was just excited to be farming and I wanted it all ... and I wanted it now! There were too many times where I would bring animals to the farm and then begin to build or look for a place to put them and because of that I had more problems than I can even count or recall. In my effort to have the farm of my dreams I sort of acted without thinking and in some ways that may have even set the farm back a little. One thing is for sure though, it caused more stress than I should have subjected on my family!

I would like to think that I have learned slightly from that though. The last two or three years things have grown much more slowly. I had to force myself to slow down and think a little before I acted. Because we slowed down a little bit we were able to focus in on some things that needed to be done as "catch-up" and focus on building a market (which is now the reason we want to scale up). We only added new ventures when we were mostly ready for them (I'm not perfect!) and there are some aspects of the farm infrastructure that work well now.

But, the biggest thing is that we didn't have to borrow anything to do any of this or cut back on our extra mortgage payments. We were able to stick to our financial values and because of that even though I made mistakes along the way there were just flesh wounds as opposed to farm killing things (if that makes any sense). Besides the financial values we were also able to stick with our other core values and even make improvements in some areas.

I guess if I could sum it all up I would say that growth on the farm has been difficult. It's really just like life ... there are times of easy growth and there are times when you learn very difficult lessons and have to learn from them ... and grow!
Posted by Ethan Book at 8:00 AM 6 comments:

For the past week I have been formulating a follow-up post to last Mondays, "Growing Pains ..." post. There were many great ideas and issues brought up in the comments that caused me to think about the farms growth to this point and possible future growth. What I have found though is that I can't express all of those thoughts in one post ... so over the next few days I thought I would expand on the "Growing Pains" that the farm is experiencing and how I view them. I wanted to start out with a little deeper look (yet still not a complete look) at our farm values, then in the following days we'll dig a little deeper into other issues.


What you have there are just a few of the values that drive Crooked Gap Farm ... in no particular order ... and said with much rambling! In the following days I will share how the farm has grown to this point, how I see it growing throughout 2013, and why growing slowly also needs a big jump every once in a while. 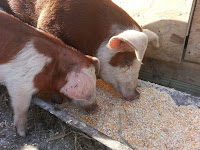 You know the saying ... "Growing up is hard to do" ... That saying has always been a bit applicable to my life in general, but now that the farm is coming up on five years in existence I'm finding that it is also a fitting statement for my "farm feelings". Way back in the beginning (as if it was a long time ago) there were just a few hogs, a few chickens, some cows, and a dream. At that time the biggest stress seemed to be how I was going to market all of that pork I had growing on the farm ... as in six hogs!

I have been mentioning recently that the farm is at a tipping point where it either needs to scale up to market that it has created or scale back to smaller market that could almost be called a "hobby" (I've never allowed myself to call it a "hobby farm"). It seems odd to say that staying at the same point the farm is now at isn't an option, but it just really isn't. Thankfully (and we are VERY blessed) there is a growing demand for our heritage breed meat and that is making things such as farmers markets, restaurant sales, and more on farm sales not only possible ... but also profitable! The rub is that in order to do all of that right the farm needs to produce more.

Now I'm not talking about thousands of animals ... or even lots of hundreds of animals. Rather I'm thinking of reaching a the goal of marketing 200 to 300 hogs per year, a few hundred chickens, some turkeys, a couple dozen lambs, and whatever beef we can get off of the limited grazing acres. What I find myself struggling with is getting over that hump ... and this time it isn't because of the marketing because I've learned a lot in that department and I'm confident in Crooked Gap Farm Heritage Breed Meats! I'm struggling with how I can up that production on the farm in a way that sticks to my farming values!

Things like winter farrowing (talked about a lot here), feed storage, whether or not I should grind my own feed, fencing, water for livestock and water sources (well?), and so many other things are flying though my mind. On top of all of that I just want to grow now ... instant farm gratification anyone ... because I think the market is there and I don't want to wait for everything to on the farm to catch up.