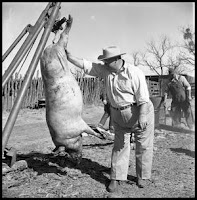 I know that Joel Salatin bought one ... I know that Walter Jeffries is building one ... and I know that I would love to have my hands in one somehow. I mean don't you ever just get those crazy little ideas in the back of your head? You know ... ideas like making a career change or I don't know ... starting a farm! Well, I get crazy ideas in my mind all the time if you haven't noticed already! My latest crazy idea involves having my hand in the meat I produce from the very beginning until the very end.

Now I'm not trying to disparage my current processor or any other processor for that matter, but there is something appealing to me about having as much control over my final product as I can. I would say that on my ideal farm I would have as much control as possible raising the animals from beginning to end, producing all of my feed and forage, processing and curing the meats, and of course marketing the bounty of the farm!

Hopefully you realize that Thanksgiving day was just last week ... and with Thanksgiving comes a nationwide focus on the turkey. Which means we see video of the president and governors pardoning birds to live out their lives on a farm, we search the internet for ideas on how to cook the perfect turkey, and in my case we hear lots of radio news stories about turkey production in Iowa. Of course the reason I heard so many radio stories is because I really only listen to talk radio stations and the played the same or similar stories all week long!

The basic story that I heard quite a few times last week is that Iowa is the number nine turkey producer nationwide and the number five processor of turkey in the country. According to this article that I found we produce about 11 million birds each year in the state! But, the thing that article says, and all the radio stories I heard said was that when you sat down for your turkey dinner you wouldn't be eating an Iowa produced bird (unless of course you purchased your turkey directly from the farmers). It seems that almost all of Iowa's turkey meat ends up in sub sandwiches at Subway or Jimmy John's.

I'm not an economist, I'm not a financial guru, in fact I'm not even an intelligent agricultural guy! So, I understand that maybe I have no reason to even think about this sort of thing and that there is probably some large answer that I could not completely understand. In fact according to this flyer from the Iowa Turkey Federation there are 85 turkey producers in Iowa (it may not be a real up-to-date flyer) and I always think it's a good thing to have more farmers in Iowa!

But, I just have to ask the question ... If we produce 11 million birds each year in our own state and we have multiple turkey processors, then why can't we purchase an Iowa raised and processed turkey for Thanksgiving dinner? That was just the thought that kept running through my head ...

With all that being said ... as long as there are no set-backs and I feel like we are set up enough to get things going we are planning on raising a limited number of heritage breed turkeys next year. I see it as another opportunity to bring a bit more diversification to the farm ... and to have a great tasting bird for Thanksgiving dinner!
Posted by Ethan Book at 8:00 AM 3 comments: 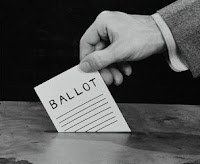 Tonight ... we stand before you ... with victory in our hands! (wait for applause to subside) The votes have been counted ... you and others from around the surrounding counties have spoken! (wait for this round of applause to subside) We want you to know that it is because of you that we are here today ... that without you none of this would be possible and we just want to offer our thanks from the bottom of our hearts ... Thank You ... each and every one of you Thank You! (there will be more excited applause here so just wait it out) Now, just as we have promised we are going to head out to the fields and woods and pastures and bring you some of the best heritage breed meat available! We're going to put on our mud boots and dig in just as we promised! Thank You! (wait for applause) Thank You! (wait for applause) Thank You! Good night and may God Bless the farm! (exit stage right to extreme amounts of applause)

Over the past few weeks I've been talking with and e-mailing some of our whole and half hog customers and I've often found myself saying or writing, "thank you so much for your support". It sort of made me feel like a politician in this political season, but the more I thought about it the more it made sense. I think that when a customer decides to purchase a half or whole hog from us (or any other item) it is like they are voting for us and for our farm and for the work we put into it. And I am very thankful for their support!

I can't tell you the last time that I checked out at the grocery store and had the cashier say, "thank you so much for your support." I'm not saying that they aren't thankful (who am I to know that), but I do want my customers to know that I am very thankful for them and their support. In fact I don't really see them as customers as much as friends and supporters! All of the "votes" for our pasture/woodlot raised heritage breed meats are what makes it possible for our farm to keep going and even grow (which we are growing). Without our supporters we wouldn't be around for very long.