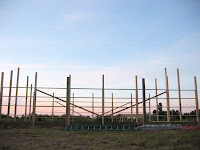 Well, this past couple of weeks has been a major break from the type of blogging that I have been doing since I started this blog nearly two years ago. But, on the other hand this is just what I had in mind when I started the blog. My idea was to be able to chronicle my journey from a guy living in town towards my goal of becoming a full time farmer. Well, I'm no where near being a full time farmer yet, but I do feel like we are making progress towards the dream and that the steps that we are taking now are huge jumps towards our desire as a family. 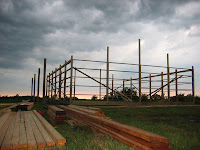 So, here is what has happened on Tuesday and Wednesday along with my plans for the weekend. As you can see in the picture at the very top they started putting in the boards that span between the posts on Tuesday. Those boards are what we are going to put our insulation between and what we will attach the sheetrock to. Then on Wednesday night when we went out (after the rain storm) we saw that they had finished all the framing of the walls, cut the posts down to size, and were ready for the rafters (which were in place on the ground). You can check out the slight difference on the second picture.

The house isn't the only thing that has progressed this week. While I have spent the evenings mowing the perimeter and along the woods in preparation for the fencing Becca and the kids have been putting in a small garden. Some transplanted tomatoes, peppers, and yams along with some beans and corn. We will see what comes up this year, but we haven't set our sights to high. One nice thing about the farm is that there is a natural garden out there also ... this week Becca has also picked some black raspberries and we will be overrun with black berries in the near future judging by what we see.

Thursday afternoon and Friday we will be gone to a wedding, but on Saturday we have a huge work day planned. We are going to rough in the plumbing (it goes under the concrete) and run water to the house. Also, while we are doing all that we are going to put in a hydrant near the garden. Hopefully by the end of the day we will have running water on the farm. If only the electricity would come quickly...

**As always you can click on the images for a bigger version**
Posted by Ethan Book at 8:00 AM