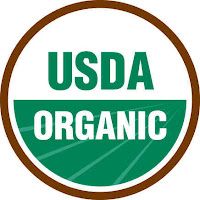 This morning I stumbled across a new documentary (watch the preview and explain to me why all low budget documentaries have similar sounding music) title, "What's Organic About Organic?".  It appears to be an interesting documentary and I look forward to watching it whenever it comes available (hopefully it won't take as long as "King Corn").  But, right away in the preview it brings up the question ... is the organic thing a movement or just a marketing ploy?  This is a question that was running through my mind this week because I was able to spend some time with my cousin from Washington state who works for the USDA certifying organic farms.
We have really never considered going completely organic because there are some major feed cost issues that would have to be worked out, but if I believed there was enough market for it I would have no problem going that direction.  We are just focused now on providing a small farm raised animal that is as natural as we can get ... basically we aren't feeding organic grains to our chickens and pigs ...
But, the bigger question is this whole idea of a "movement".  I have always had a hard time when I thought about identifying myself with a "movement" (other than the Gospel) because it just feels like a "movement" is something weird or way more liberal than I can stomach.  But, on the other hand it seems like if I am part of the thing that encourages eating fresh and local food I am a part of a movement ... can I handle that?
The bigger question that it looks like this documentary tackles is the question of what is behind the organic labeling (at least that is what I think it is about).  I am very interested to hear their thoughts and your thoughts ... so, let me know what you think.
Posted by Ethan Book at 8:31 AM

Ethan, I get your point about you claiming feed input costs as a reason not to go organic.

Believe me, as oil prices continue to rise, as they will until the oil runs out, conventional chemical farmers will face rising input costs each and every year until they embrace sustainable practices. (Most fertilisers are a by-product of the petroleum industry - it's a dead end game.)

Here in Australia, demand for all organic produce far outstrips supply, and I believe the US market to be similar. You won't have a problem finding customers if you choose that market.

Given the mess the planet is in, I for one can't think of any reason that we should be adding to the problem when alternatives exist.

Has for believing that organics is a movement and you have something against movements, I suggest you might like to look back to how your grandparents and their forebearers farmed before chemicals, or did 'farming' start as a movement?

Thanks for the link to the movie. Looks interesting.

is an online tutorial course about transitioning to organic that explains some of the Organic Standards needed for certification.

Even if organic certification isn't desired some of the techniques and standards of organic farming could be useful to most farms.

A smaller diverse farm would be a perfect fit for something like Organic certification. Input costs could be better controlled if you grew your own soil fertility, saved your own seed, and grew a portion of your own "value added" organic feed.

I personally don't think that all agriculture must become Organic to solve or prevent "the mess the planet is in". But as a way of adding value to your farm products, or lowering input costs it is a viable option.

In my role as consumer I approach the organic label as I would any marketing ploy -- in fact I usually avoid products that extol their organic virtues too loudly. It's all about big business, big bureaucracy and big piles of paperwork. Where is the room for caring, stewardship of the land or just plain love in that?

If I can shake the hand of the farmer I buy from then I can build trust. And trust is what I want in my food not government certification, look where that has gotten us so far.

"Is it a movement or marketing"-- depends on who's farming!

On that recent field trip we took up to Iowa (Ethan, thanks for the hookup with PFI- we ended up talking to Sarah Carlson from there after a full of touring Monsanto labs, which was interesting but not after 8 hours), one of the things that stuck with me was how misleading (irrelevant, whatever) the designation "Organic" is.

There are lots of ways to screw up the planet without using agrochemicals. Using row crops like corn to feed ruminants is a really good one, yet cows packed in a feedlot can be considered "organic" as long as their feed grain wasn't sprayed. Guess what? All that dirt going down the Mississippi from the organic cornfield doesn't know that it's supposed to stay put just because it doesn't have any pesticides on it!

So with things like that being the case, I keep thinking it's got to come down to people knowing more about how ecology and agriculture work. Without that, arbitrary rules are fair game. I have a friend who's about to start teaching high school biology and I am VERY excited to start setting her up with some killer agriculture field trips. (No pun intended....)