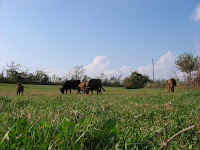 Check out this POST from a couple days ago on the Homesteading Today site. It relates to the Small Farm conference in Columbia, Mo. I had really wanted to attend this event, but because of a youth conference, I was in a hotel with a ton of teenagers-not farmers! The original said that it was a wonderful conference, but the follow-up posts brought up a pretty cool topic that I haven't heard very much about ... Ultra High Stock Density Grazing!

There were two main speakers there talking about grazing. One was Jim Gerrish (of Management Intensive Grazing fame) and the other was Greg Judy (someone that I don't know much about now, but I'm sure I'll learn more). From reading the posts, it sounds like Mr. Gerrish talked a lot about year-round grazing and using stock-piled tall fescue as a winter forage (gotta find out more, because we have a lot stock-piled now) because of it's cold season nutritional value ... plus they say it can support between 2,000 and 8,000 pounds per acre when managed with rotational grazing. That means we are talking about grazing somewhere between 3 and 10 or so Dexters! Hmm... I think that would make me consider swapping out the corn for grazing.

But, 2,000 to 8,000 pounds per acre of winter grazing is nothing compared to what Mr. Judy does. He practices Ultra High Stock Density Grazing and grazes around 500,000 pounds of beef per acre! Okay, I don't know if I can even imagine that, but he is not the only one doing it so it must be working! If this is possible (and I'm sure it takes a ton of inputs) I don't see why more people aren't doing it ... well, I guess I know why they aren't ... but it is pretty cool. Of course, if you have density this high you are going to be moving them more than once a day.

This is pretty cool stuff and speaks to the possibilities of what we could do without that 70% of our corn crop that is used to feed cattle. It should be noted that according to the poster, Mr. Gerrish is running between 50,000 and 100,000 pounds of beef per acre on his farm. One of the posters said they asked Mr. Gerrish if he was opposed to Ultra High Stock Density Grazing. He said that he wasn't opposed to it, he was just lazy. Mr. Gerrish only moves his cattle once a day at the most so there is a bit less work involved, but he still gets very high yields from his pastures.

I would be interested in reading more about this if anyone has comments, link suggestions, or knows of books relating to the topic!
Posted by Ethan Book at 7:40 AM

Get Greg Judy's book, "No Risk Ranching." This guy has no machinery - only electric fence, and he and his wife manage all the cattle and they BOTH have full-time jobs, which they'll be able to quit soon because of the success of replacing their old management intensive grazing (MiG) system with high density grazing.

If you check out the may 2008 issue of Acres USA ther is an excellent article on Mob Grazing by Joel Salatin.