Laying Eggs for the Book Farm... 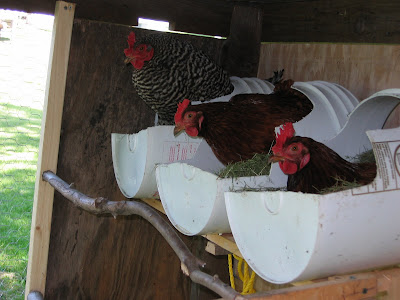 Here is a quck picture of three of our hens in the laying boxes ... errr ... buckets. They are just free 5 gallon pails from the grocery store that I cut up with my jig saw. It took them a day or so to get used to them, but for the past two days we have picked out 5 eggs each day!

I just thought I would add a quick update to say that all six of our chickens laid yesterday! We had topped out at five layers a few times, but we had one black hen that hadn't laid since the day we brough her home. Well, yesterday she got back on track and hopefully we will be able to average about five a day from here on out. If we can do that then we will begin selling some eggs to help cover the costs. We will just be looking for 2-4 people to buy a dozen eggs every week or two. Hopefully this can be a small step in the farming direction for us. It would be a very small step, but a step nonetheless.
Posted by Ethan Book at 9:45 PM No comments:

Okay, so I mentioned briefly in my last post that there was one minor incident in the chicken pen. On Thursday morning (the first morning we had the chickens) I woke up early to move the pen and get ready for work. I went out and found that the pen was heavy and that I had to really lift to get it to move any. So, as I was lifting I noticed a few hens trying to escape, but I was always able to get it down before they got out ... until this girl decided to escape! 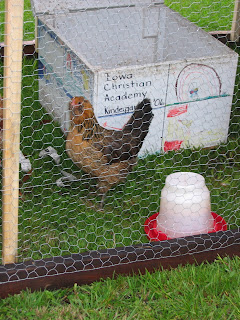 Yep, this little girl took off running towards the neighbors backyard ... which I might add looks a lot like a nature preserve with tons of bushes, shrubs, etc. I lost her and knew that I wasn't going to catch her by myself so I went inside to get reinforcements (a.k.a. Becca). We went out and I took off down the railroad track waking up every dog along the way! Finally, I gave up and decided that she would have to try to make it back to the yard on her own if she survived. When I was just about back to our yard I noticed her in the undergrowth of the neighbors yard. What ensued was about a twently minute chase all over the yard, up and down the railroad ditch, and back and forth across our back fence! In the end Becca was the one that was able to make the catch ... with our big northern pike fishing net!!!

So, what did I learn? Number one: I need to find a better way to move the pen. Right now I am moving it sideways which is much easier, but I think I will add some wheels to the heavy end to make things easier. Number two: Chickens can and will run away if they get a chance! Number three: It's a good thing that I got up early to move because I needed the extra time to catch my runaway.

Ahh, the life of the city dwelling wannabe farmer. Hopefully tomorrow I will get a chance to go check out some Dexters in Carlisle. Maybe I will find the beginning of a herd???
Posted by Ethan Book at 7:53 PM No comments:

Of Chickens and Men 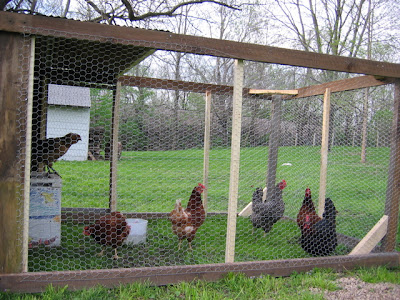 When I posted my last entry I put a little note at the bottom about hoping to be able to post some chicken pictures soon. Well, soon can sooner than I expected! On Monday my dad called to tell me he was on the way to my uncles with the trailer so he would drop off the wood that I needed to build the pen. He showed up Tuesday afternoon and after unloading we were talking about his plans. That was when I found out that he would be driving through again on Wednesday afternoon. We immediatly decided to have him bring back our chickens which meant we only had about 24 hours to build their home! So, between soccer practices and my work at church we got the main parts of the pen done in time to house the chickens. I haven't finished the nest box yet, but they are in their new home and hopefully we begin giving us some eggs. We have six of the lovely ladies!

Here are some pictures of the pen building process. I used mostly salvaged materials to keep the costs down and designed something that is somewhat movable. I need to do a little work on the move ability part, buy you can read the next post for those details! 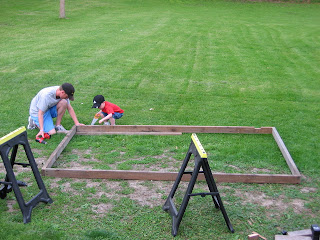 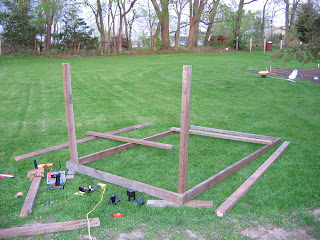 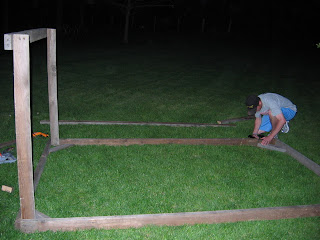 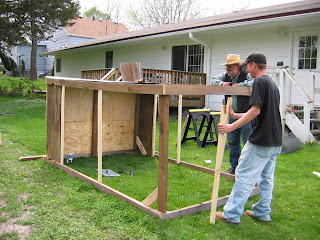 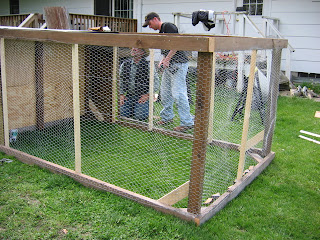 Dexter Cattle in the Future? 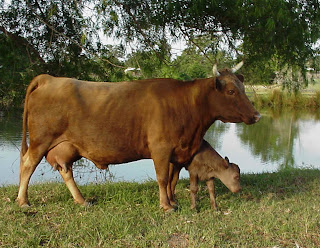 Over the past few months in my research and reading I've been thinking about having a grass-finished beef herd as part of my farming operation. If I was going to have cattle on my farm (you must remember that my farm doesn't exist yet!) then wanted to have cattle that could fill a niche, forage on pasture well, and be easy with calving. In my research I came across the Dexter breed which is an older breed from Ireland that didn't come to the U.S. until early in the 20th century. Also, they are a smaller breed of cattle with cows/heifers toping out between 650 - 800 or so and bulls/steers sometimes going a little higher. The beef is supposed to be especially tasty, but just as importantly to me they are great foragers and realitvely easy to care for becuase they are such a hardy breed. Another interesting thing about them is they really are a tri-purpose animal. Dexters can be used for milking, for beef, and even as a draft animal.

I am planning on going to visit a few breeders who live in my area to take a look at their herds and learn some more about the breed. Also, my dad and I have been discussing the possibilities of beginning a small herd on his farm to learn, test the waters, and get a head start on things if this is a direction that we can eventually follow.

I continue to be excited about farming possibilities and I am trying to learn as much as I can. Soon I would like to have some plans and goals for our farming adventure posted and hopefully we'll have pictures of our backyard laying hens and their movable pen soon!