Earlier this week I was able to get the haybine up and running and cut about 4 acres (more or less) of grass. It was nice to know that the haybine we purchased last year was in good working condition. I knew the rake would work fine because I used it last year, so the last piece of the puzzle that needed to be put together was whether or not I had a working baler. I knew that there was a spring underneath that was broken, but since I do not have a manual (or a lot of baler knowledge) we didn't get the correct part ordered.

Good thing there was a plan B, or C, or D ... I don't really remember which plan it was, but I do know that we were able to borrow the families New Holland baler. With a working baler in hand we were able to finally put up the hay that I cut. Needless to say, it was plenty dry and ready to be baled.

The grass in that area of the farm is mostly a mixture of warm season grasses. As Rich mentioned in an earlier comment we have some Bluesteam, Indian Grass, and Switchgrass which actually covers most of our farm. It is a nice stand in some parts and a bit thin in most of the farm. I would say our bales averaged about 40 or 50 each and we have right around 130. Not a real good cutting, but at least it is a start.

It is very nice to look into the shed and see hay piling up!
Posted by Ethan Book at 8:00 AM 5 comments:

I'm sure this video and story is making the rounds now, but I've been waiting to put it up because of the guest post. Also, it gave me some time to think about my thoughts on the subject ... and after much reflection I realized I'm not sure where I land on this subject. Actually I guess I have an idea of where I land, but the answer is fairly complicated. I'll get to that, but first the video in case you haven't seen it yet (and an article from Fox News).

Here is where it gets complicated. I think there would be a fairly large segment of Americans (maybe even a majority?) outraged at the idea of the chicks being ground up alive because they aren't needed. On the other hand I am completely convinced that a large portion of those that were outraged woudn't not be very excited about the prospect of paying substantially more for eggs or or poultry products (because one of the reason of getting rid of these chicks is because they will be slow growing for the meat market).

So really, I believe it is a catch-22. I do not believe it is very good stewardship to waste so much potential and that is why I think more dual-purpose (both meat and egg layers) chickens are the way to go. But, the average consumer in American wants eggs cheap and on demand and to get that high capacity output our large commercial farms need super birds. And I guess the super egg laying breed boys aren't quite as super as the girls.

What are your thoughts on the subject ... no big deal ... over zealous hidden camera guy ... or something to think about?
Posted by Ethan Book at 8:00 AM 25 comments:

Have Haybine ... Will Cut Hay 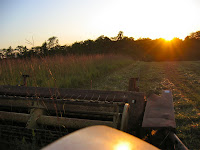 Last year we bought a line of hay equipment, all from the same farmer. But, as of yesterday morning the only piece of equipment that I had used was the rake. Last night that all changed after I finally got the gumption to get the haybine ready to go and cut some hay. I spent some time in the morning crawling around underneath and on top of the haybine looking for all of the grease zerks and then I oiled all the moving parts that didn't have zerks. After all that I began working on the big problem ... getting the hydraulic cylinder to lower. I don't know exactly what the deal is (it's a fairly involved story, so I won't get into it), but lets just say I am able to lower and raise the haybine ... just not as easily as I should be able to!

Once all of that was done I was ready to go. The area I cut wasn't very big (probably 5-7 acres), but I really enjoyed the process. Partially because it was a beautiful night and partially because I was doing some productive work on the farm and things were mostly working out. As you can see from the picture the sunset was pretty amazing and it was only made more amazing by the fact that I saw it from the tractor seat as I was making rounds cutting hay.

Now, I just have to see how long it takes to dry, rake it up, and then figure out a baling plan. I may have gotten a little ahead of myself, but I have at least four different plans to get it baled. I'm not too worried about it ... yet!
Posted by Ethan Book at 8:00 AM 3 comments: