Lessons From a Snowy Day ... 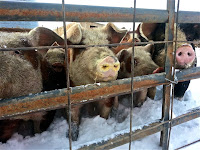 I'll soon be starting my fifth year on the farm, but "The Beginning Farmer" still describes me pretty well! Today's snow event (7 inches of snow and wind to drift it into pretty piles for me) reminded me of the various things that I've learned over the past nearly five years. As I was talking with the pigs about it this afternoon (you can see from the picture how intently they were listening) we decided that I should share some of those lessons learned from snowy days. With that in mind I've put together a list in no particular order ...

Not that long my main concerns with the days weather was if it would interfere with my days outdoor plans. I worried about things like cold fronts and warm fronts because of how they may effect the fish bite ... I worried about rain because it might cancel my slow-pitch softball game ... and I worried about snow because then I would have to shovel it. These days things are a little different ...

Although I'm not constantly checking the weather because I find that there hasn't been much I could do to change it I do find myself looking ahead and trying to plan around the freeze and thaw that we experience here in central Iowa. For example ... if I have a choice of moving big round bales or pulling three tons of feed in my feed wagon I would rather do those things when the ground is frozen as opposed to when there is a nice layer of slick mud!

The thing that does get my attention these days though are articles such as this one from one of the local television stations. When this came across my news feed I just had to groan a little at the suggestion from "experts" that this may be a two-year drought. This past year was a bit stressful with the lack of rain, heat, and of course the rising feed prices. In the short almost five years on the farm I have seen my hog feed prices more than double! At the same time I have not doubled the prices of my products for sale and have been working very hard to improve my efficiencies on the farm when it comes to feeding.

When it comes to our heritage breed hogs it does help very much having them out on the pasture and in the woodlot, but I also find myself constantly checking the feeders and working to adjust them the best I can so that feed is not wasted. I'm also planning on doing a better job of getting the cattle into the little nooks and crannies of the farm this year (woods, corners, ditches, etc.). As far as the chicken and rabbits go it is going to be very important to keep them rotating on the pasture and foraging as much as possible.

I would love to hear what others are doing to increase feeding efficiencies whether it is for ruminants or non-ruminants!
Posted by Ethan Book at 8:00 AM 1 comment:

Whew ... Between Christmas ... Cold weather ... and most recently the passing of my Grandmother it has been busy and I have not been blogging. I'm ready to go again, but instead of my thoughts I thought it would be great to share some "blogging" from my Grandma. I assume that this was written after the effects of the Farm Crisis had hit the Book Family. At the peak my Grandpa and three of his sons were farming roughly 1500 acres with diverse crop and livestock operation. Most of that was lost ...

The farm crisis crept up on us through the affluent 1970's. In the 1970's, we farmers finally could feel equal to our city neighbors. A farmer was usually worth more than the merchant on main street. This was a new feeling for me, who had lived through the Great Depression of the 1930's, and the struggling years of the '40's, '50's and '60's. At long last, corn was over $1.00 per bushel. Soybeans got up to $7.00 and more.

In the late '60's Don and I had bought land at a high price. We paid from $400 an acre for the more rolling land to $800 per acre for the best land. We owned the home 80 acres, bought in the 1940's and paid for with corn, soybeans, hay, fed cattle, and hogs. The home place was mortgaged to make down payments. The banks were easy to get along with because land values were going up.

Don had started farming with a John Deere tractor bought with the money from cattle he fed out with his dad on the farm at Storm Lake. He married the girl he had met at Iowa State College, Pauline Kingsbury, me. We rented a half section from Bertam Holst who was a prominent business man in Boone. In fact he owned a bank. We borrowed money, and bought on time the necessary machinery to farm 320 acres in Boone Co.

After a few years Don began to realize his dream of owning land. We sold the convertible and scraped together a down payment on the 80 acres in Milford Township, Story County, Iowa.

I feel the need to remember farming all those 320 acres, feeding all those cattle, stringing the corn along in the bunks, the hired men, carrying water to the hogs, pumping water by hand from the pump west of the house. At first there was no electricity. Two sons were born, ditches were dug for water pipes after rural electricity lit up our house ... thus you get a bit of an idea of how it was before buying all the land.
Posted by Ethan Book at 8:00 AM 3 comments:

This is the Real Very First Episode of The Beginning Farmer Show! 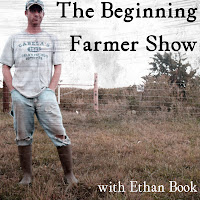 About four months ago I finally decided to sit down and record the very first episode of The Beginning Farmer Show, but I didn't really want to put it out there because it wasn't very good ... in fact it was even worse than TBF Show Episode 001 which I wasn't totally pleased with either. But, I recorded it so I thought that I would at least make it available to those that subscribe through iTunes or other services.

On this episode of The Beginning Farmer Show I share a little bit about how I got started in farming and why it all came about. I talk about my high cholesterol, my dislike of vegetables, the first cow and calf, and how this whole thing exploded. If you have never made the trek all of the way to the beginning of The Beginning Farmer Blog and you want to know a little bit about how it began then this is the show for you!